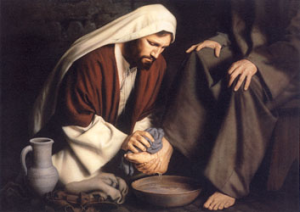 Oswald Golter was a missionary in northern China during the 1940’s. After ten years service he was returning home. His ship stopped in India, and while waiting for a boat home he found a group of refugees living in a warehouse on the pier. Unwanted by anyone else the refugees were stranded there. Golter went to visit them. As it was Christmas-time wished them a merry Christmas and asked them what they would like for Christmas.

“We’re not Christians,” they said. “We don’t believe in Christmas.”

“I know,” said the missionary, “but what do you want for Christmas?” They described some German pastries they were particularly fond of, and so Oswald Golter cashed in his ticket, used the money to buy baskets and baskets of the pastries, took them to the refugees, and wished them a merry Christmas.

When he later repeated the incident to a class, a student said, “But sir, why did you do that for them? They weren’t Christians. They don’t even believe in Jesus.”

Becoming more like Christ should be the desire of every believer, and it is encouraging to know that God has the same desire for us. In fact, the Bible says that God “predestined believers to be conformed to the likeness of his Son” (Romans 8:29). Making us Christlike is God’s work, and He will see it through to the end (Philippians 1:6).

As I get older, I can look back now on the man I used to be and where God has done such a work in my life as I have allowed Him to. This is not an automatic process my friend. We must consciously and selflessly give ourselves to the working of the Master Potter in our lives each and every day. As the apostle Paul wrote “I don’t really understand myself, for I want to do what is right, but I don’t do it. Instead, I do what I hate.” (Romans 7:15). Every day we are presented with choices, challenges, temptations and decisions that will either bring us closer or further away from conformity in becoming Christlike. The decision is ultimately always up to us of how we choose.

I wish to leave you with one question that I must ask of myself first. When the world looks, listens and watches you and I each day, what do they see? What do they hear? Do they see and hear imitators of Christ which reflect His image in how we live, speak and conduct ourselves? Or do they occasionally see just a dim reflection of Him which comes and goes according to which environment  or surrounding which we happen to be in at the time?

St. Francis  of Assisi reportedly said, “Preach Jesus, and if necessary use words.” Furthermore, Brennan Manning is quoted with “The greatest single cause of atheism in the world today is Christians: who acknowledge Jesus with their lips, walk out the door, and deny Him by their lifestyle. That is what an unbelieving world simply finds unbelievable.”

My friend, if we truly desire the see change in the world around us and people coming into the revelation knowledge of Jesus, how so desperately we need to  deny ourselves, take up our cross (whatever your cross may be), and be true disciples and followers of Jesus.

You could very well be the answer to someone’s prayer today, tomorrow and the days to come.