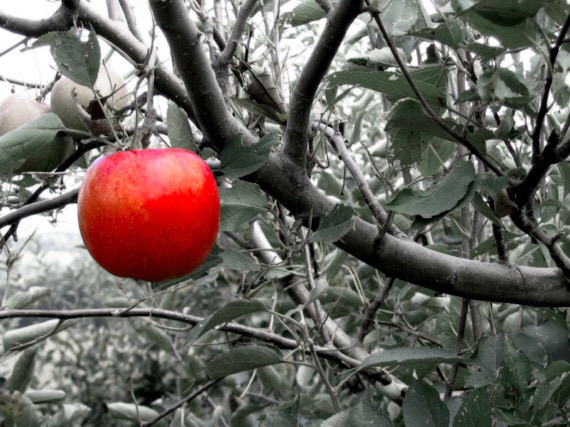 But evil men and impostors will proceed from bad to worse, deceiving and being deceived.- 2nd Timothy 3:13

The story is told that there was once a watermelon farmer.  In June, during peak watermelon season, he began to notice that someone was stealing his prize winning melons.  Slowly, but steadily, melons were disappearing, and along with it,  his profits.

He tried everything until one particularly fine morning, he had an idea.  Laughing with self-satisfaction, he grabbed an old piece of wood, some paint, and began writing.  He took his handiwork to the edge of the watermelon patch, where he nailed it triumphantly to the fence-post.

Caution!  One of these watermelons is poisoned!

And much to his delight, the watermelon thief stopped.

After a few days, the farmer was ecstatic over his own cleverness.  He congratulated himself, basking in the afterglow of what he thought was a job well done.

Then he saw it.  From across the field, he noticed his sign had been altered and edited.

Approaching cautiously, squinting, he saw that a second line had been added below his own handwriting.

Caution!  One of these watermelons is poisoned!
(But now two of them have been poisoned!)

Now, while this is a fictitious story, I believe it clearly portrays how satan, our great adversary, works. Just when think you’ve outwitted him, and came out on top, he throws you a curve when you least expect it in an attempt to lead you astray and use his greatest tool in his arsenal of weapons, deception.

You see, unlike our Heavenly Father, satan cannot create anything from nothing (better known as Ex nihilo in Latin meaning “out of nothing”). He has to piggyback on what God has already established and done since creation in an attempt to lead mankind down that wide, deceptive, road to destruction. Remember, his mission is to steal, kill and destroy ( John 10:10). And unless you are aware of his schemes and tactics, you will fall short of God’s purpose for your life and all His best He so desires to give you, and become prey to satan’s snares.

Remember, back in the Garden of Eden, it was satan that put doubt into the mind of Eve. When the serpent came to Adam and Eve, he tempted them with a lie. Adam knew the truth, but Eve did not, because she didn’t hear God say it. Satan introduces doubt and entangles Eve in deception, but Adam, either out of a distrust for God, sheer disobedience, or even fear, he chooses to do what he knows is wrong, thus leading them to be banned from paradise and dying spiritually and eventually physically.

Again, when Jesus was tempted in the wilderness for forty days and nights, the enemy comes to him actually quoting from the scriptures in an attempt to see Jesus fall from His divinity and sinless life and destroy God’s plan for the redemption of mankind. You see, one of Satan’s biggest tricks is to try and confuse you about who you are, and whose you are. The deceiver will wait until you are at your weakest point in life and then come to you with questions about your life… your calling… and your ability to do for God the Father as he did when he came to Jesus in the wilderness at one of his weakest points.

But my friend, you can rejoice and know today that you can overcome the deceiver and have victory through Jesus! Jesus tells us in John 16:33 “I have told you all this so that you may have peace in me. Here on earth you will have many trials and sorrows. But take heart, because I have overcome the world.” Furthermore, in Mathew 28:18 we read “Then Jesus came to them and said, “All authority in heaven and on earth has been given to me.” No matter which is your translation of choice, “All” is still All. And as a child of God, you have this same authority living inside of you if you’ve accepted Jesus as Lord and Savior.

So the next time the enemy comes to you attempting to deceive you and lead you astray away from God’s will for your life, just boldly take your stand and position in Christ and proclaim, “satan, it is written…..!”