Do Talk To Strangers 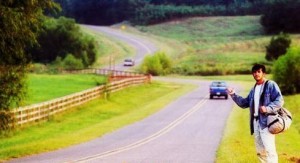 Back around 1979 when I was around seventeen years of age, I worked for an air conditioning contractor while going to high school. I was in the work program where I attended high school half of the day and then went to work after that. One of my job responsibilities each week was to drive to Shreveport, LA and pick up parts, appliances, etc., for my employer. On one of these particular trips, I was heading back on Interstate 20 when all of a sudden, out of my peripheral vision, a hitchhiker caught my attention. Now, you have to realize that back then, it wasn’t near as unsafe as it is now to pick up someone that just needed a lift for a few miles. Immediately, something within me ignited that I needed to pick this young man up and give him a lift. I pulled over, rolled down the window and simply asked, “need a ride?” (a rather humorous question when I think back now…”No, I’m just out here counting eighteen wheelers go by! ) He hopped in and and I asked him where he was bound. He replied that he was on his way to Tulsa, Oklahoma to enroll at Oral Roberts University. I had heard the name Oral Roberts and knew he was a minister but was not at all clued in to his ministry nor school. He immediately asked me about myself, where I was from and basically we just had a great conversation and I felt so at peace just talking to him. Like we had known each other for years. We continued on until it was time for me to exit the interstate and there was a Dairy Queen in close proximity and he informed me I could just drop him off there. I asked him could I give him a few dollars to eat a bite and he graciously received. The most remarkable thing though about this “close encounter” with my new friend is that before he exited the truck, he did something that just blew me away. He asked if he could pray for me. What? Why would he ask such a thing? Did I appear to him that I needed prayer? After all, I thought that I was a pretty decent person…in my own eyes at least. I of course replied, “yes, you can by all means pray for me brother”. He spoke the most eloquent, humble, selfless prayer over me, my family, my future and over my life. I told him “thank you” and we said our good-byes and he was on his way.

It was many, many years that after I had heard about the ministry of angels that I immediately reflected back on this special appointment and how I believe with all that is within me that God had sent this hitchhiker, this young man, this stranger to me, this angel into my life to simply let me know that He loved me and that He had a plan for my life. A plan that He so desperately wanted to show me and lead me into if only I would trust Him enough with my life by faith to.

I remember several years ago how the subject and topic of angels got to be so popular. It seemed everywhere you turned, someone was writing a book, painting pictures, creating sculptures about angels. Now while there is absolutely nothing wrong in my opinion to do any of these, I believe the world actually began to unknowingly began to idolize and worship these heavenly hosts. But what does Scripture say? The Word of God clearly and emphatically forbids the worship of angels. For instance; Satan, who himself is an angel, often comes to the church transforming himself into an angel of light which Paul tells us – tried to cause Jesus to sin during the temptation in the wilderness by tempting Him to engage in angel worship.

Again, the Devil took Him [Jesus] up on an exceedingly high mountain, and showed Him all the kingdoms of the world and their glory. And he said to Him, “All these things I will give You if You will fall down and worship me” [if you will worship an angel – in this case, a fallen one]. Then Jesus said to him, “Away with you, Satan! For it is written, ‘You shall worship the Lord your God, and Him only you shall serve.’ ” (Matthew 4:8-10)

So yes, please do by all means as the writer of Hebrews instructs us to in the opening scripture to always be kind to strangers due to the possibility of perhaps entertaining these heavenly hosts called angels. But never take your eyes off of Jesus, the author and finisher and our faith. For He and He alone is worthy of all our praise, honor and worship.

“Heavenly Father, we thank You for the ministry of angels. You tell us in Your Word that they are all ministering spirits sent to serve those who will inherit salvation. Thank you that we all have angels that you have appointed to us to work on our behalf as we allow them to and we trust by faith that they will always fight for us who stand boldly and proclaim You as Lord & King over all. In Jesus’ name, Amen”.

2 Responses to Do Talk To Strangers